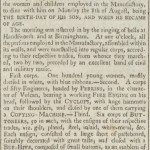 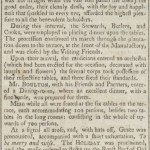 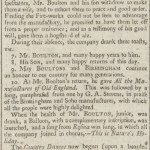 It is much to the honour of the workmen at Soho, that, in conformity to the wishes expressed by their Employers, not one of them was absent from the Manufactory during the late Riots.

Soon after the military arrived at Birmingham, and tranquillity was restored, Mr. BOULTON took an opportunity of thanking his people for the good order they had observed; and at the same time invited them all, with the women and children employed in the Manufactory, to dine with him on Monday the 8th of August, being THE BIRTH-DAY OF HIS SON, AND WHEN HE BECAME OF AGE.

The morning was ushered in by the ringing of bells at Handsworth and at Birmingham. At one o’clock, all the persons employed in the Manufactory, assembled within its walls, and were marshalled into regular corps, according to their respective trades, from whence they marched, two by two, preceded by an excellent band of civil and military music.

First corps. One hundred young women, mostly dressed in white, with blue ribbons. – Second. A corps of fifty Engineers, headed by PERRINS, in the character of Vulcan, bearing a working FIRE ENGINE on his head, followed by the CYCLOPS, with huge hammers on their shoulders, and closed by one of the carrying a COPYING MACHINE. – Third. Six corps of BUTTONEERS, 50 in each, with the ensigns of their respective trades, viz. gilt, plated, steel, inlaid, white-metal, &c. Each ensign, consisted of a large sheet of pasteboard, suitably decorated with great taste; and closed with a BEE-HIVE, composed of small buttons, as an emblem of industry. – Forth. Two corps of ARTISTS, employed in the silver, plated, and or-moulu manufacture. The first bore a silver Epergne, and the last two golden Vases upon a stand covered with crimson velvet. – Fifth. The workmen employed in the Rolling Mills, carrying an ensign composed of fillets of rolled metals of various colours, forming festoons, loosely playing, and which had a pretty effect. – Sixth. A corps of MONEYERS, carrying a glass vase, filled with Coin.

The procession moved in regular order from the Manufactory, through the lower part of the Soho Gardens, and round the extremity of the grounds, whilst Mr BOULTON’s friends were seated upon the lawn at the front of the house. The gradual appearance of the procession, rising from behind the hill, with the martial music playing; the extent of the procession (for the rear of it was not in sight when the van had passed the lawn) the good order, their cleanly dress, with the joy and happiness that sparkled in every eye, afforded the highest pleasure to all the benevolent beholders.

During this interval, the Stewards, Butlers, and Cooks, were employed in placing dinner upon the tables. The procession continued its march through the plantation down to the terrace, at the front of the Manufactory, and was closed by the Visiting Friends.

Upon their arrival, the musicians entered an orchestra (which had been erected for the occasion, decorated with laurels and flowers) the several corps took possession of their respective tables, and there fixed their standards.

Mr. BOULTON, with his Friends and Partners, entered a Dining-room, where an excellent dinner, with a fine turtle[?] was prepared for them.

Mean while all were seated at the six tables on the terrace, each accommodating 100 persons, besides two tables in the long rooms: consisting in the whole of upwards of 700 persons.

At a signal all arose, and, with hats off, Grace was pronounced, accompanied with a short exhortation, To be merry and wise. The HOLIDAY was proclaimed, and the music ordered to strike up the Roast Beef of Old England, and dinner began. Every dish had its carver appointed, and each table its waiters, so that every on dined comfortably, without the least disorder or confusion. When dinner was ended, the band played, and the company sang, as Grace, Not unto us O Lord, &c. The tables being cleared of the eatables, the company prepared for the rites of Bacchus.

The first Toast given, was The KING! Followed by three huzzas. Song, God Save the King, by Mr Stanley, with the chorus by all the company. – 2. The Queen; A Glee by Probin, Stanley, &c. – 3. The PRINCE OF WALES. Song, See the conquering Hero comes, &c. – 4. The DUKE OF YORK, and the British Army. Song, Britons strike Home, by all of the company. – 5. The ROYAL TAR, and the Navy of Old England; with Rule Britannia, in full chorus. – 6. ALL THE ROYAL FAMILY, and a Glee.

The hills around now being covered with thousand of spectators, Mr Boulton and his son withdrew to make them a visit, and to exhort them to peace and good order. Finding the Fire-works could not be seen to advantage from the manufactory, he promised to have them let off from a proper eminence; and as a testimony of his good will, gave them a hogshead of ale.

During their absence, the company drank three toasts, viz.

7. Mr. BOULTON, and many happy years to him.
8. His SON, and many happy returns of this day.
9. May BOULTONS and BIRMINGHAM continue an honour to our country for many generations.
10. At Mr. Boulton’s return, he gave All the Manufactures of Old England. This was followed by a song, paraphrased from one by G.A. Stevens, in praise of the Birmingham and Soho manufactures, with which all the people were highly delighted.

When the health of Mr. BOULTON, junior, was drank, a Balloon, with a complimentary inscription, was launched, and a song from Rosina was sung, in which all the company joined in chorus, – This is Nature’s Holiday.

The Country Dances now begun (upon a boarded platform previously prepared for that purpose) in which part of the company from the Dining-room joined; but the dancers being too large for one set, they divided into three, with as many bands of music.

The dancing continued until evening. A Balloon was again sent up; Rockets and Cannon were discharged; to these succeeded some beautiful Fire-Works, prepared by Mr. NEALE, and at ten the closing gun was fired, when all peaceably departed in the highest good-humour; and those who came to Birmingham, had the satisfaction of being preceded upon the road by the martial music.