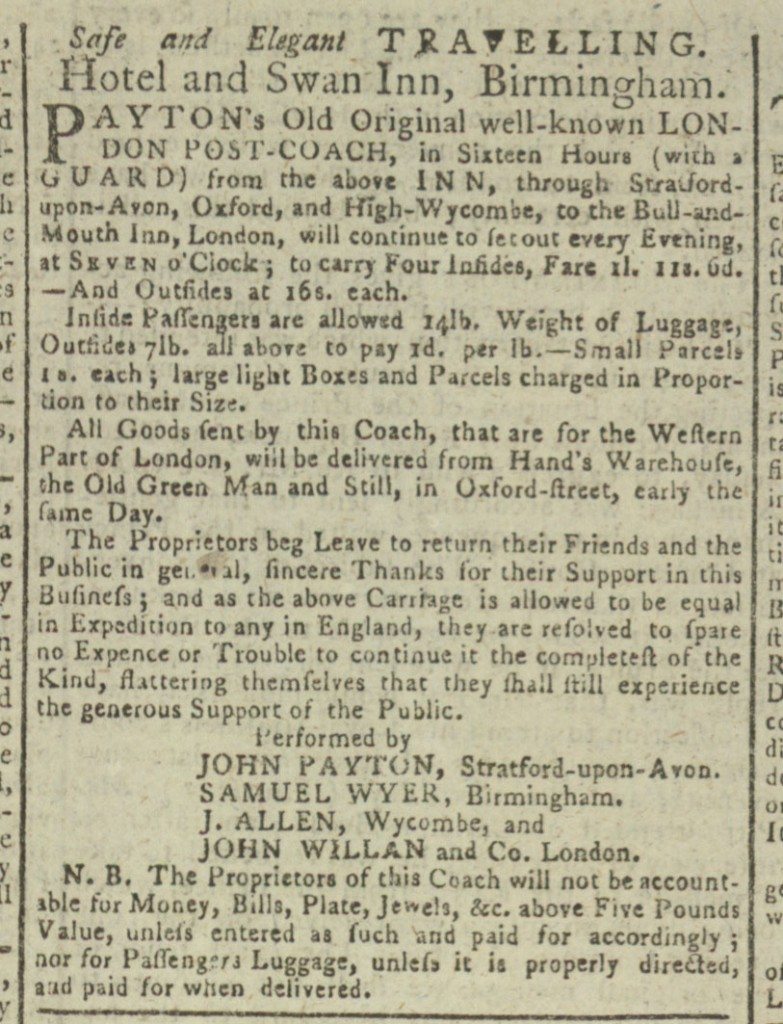 Aris’s Birmingham Gazette – Advert for transport between Birmingham and London

Safe and Elegant TRAVELLING.
Hotel and Swan Inn, Birmingham.
Paytons’s Old Original well-known LONDON POST-COACH, in Sixteen Hours (with a GUARD) from the above INN, through Stratford-upon-Avon, Oxford, and High-Wycombe, to the Bull-and-Mouth Inn, London, will continue to set out every Evening, at SEVEN o’Clock; to carry four Insides, Fare 1l.11s.6d. – And Outsides at 16s. each.
Inside Passengers are allowed 14lb. Weight of Luggage, Outsides 7lb. all above to pay 1d. per 1b. – Small Parcels 1s. each; large light Boxes and Parcels charged in Proportion to their Size.
All Goods sent by this Coach, that are for the Western Part of London, will be delivered from Hand’s Warehouse, the Old Green Man and Still, in Oxford-street, early the same Day.
The Proprietors beg Leave to return their Friends and the Public in general, sincere Thanks for their Support in this Business; and as the above Carriage is allowed to be equal in Expedition to any in England, they are resolved to spare no Expence or Trouble to continue it the completest of the Kind, flattering themselves that they shall still experience the generous Support of the Public.
Performed by
JOHN PAYTON, Stratford-upon-Avon.
SAMUEL WYER, Birmingham.
J. ALLEN, Wycombe, and
JOHN WILLAN and Co. London.
N.B. The Proprietors of this Coach will not be accountable for Money, Bills, Plate, Jewels, & c above Five Pounds Value, unless entered as such and paid for accordingly; nor for Passengers Luggage, unless it is properly directed and paid for when delivered.