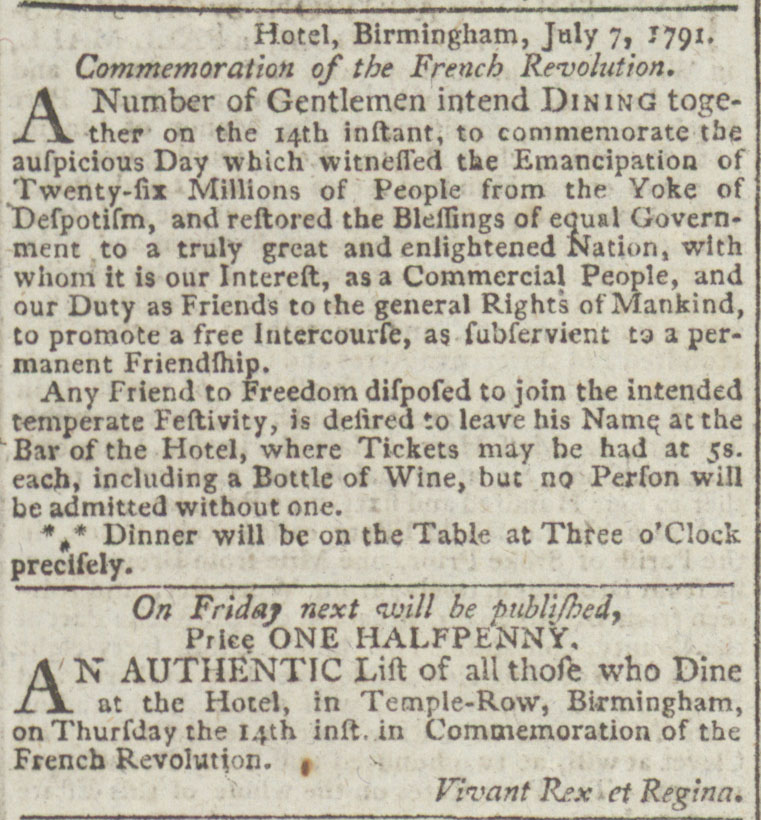 Hotel, Birmingham, July, 1791.
Commemoration of the French Revolution.
A Number of Gentlemen intend DINING together on the 14th instant, to commemorate the auspicious Day which witnessed the Emancipation of Twenty-six Millions of People from the Yoke of Despotism, and restored the Blessings of equal Government to a truly great and enlightened Nation, with whom it is our Interest, as a Commercial People, and our Duty as Friends to the general Rights of Mankind, to promote a free Intercourse, as subservient to a permanent Friendship.
Any Friend to Freedom disposed to join the intended temperature Festivity, is desired to leave his Name as the Bar of the Hotel, where Tickets may be had at 5s. each, including a Bottle of Wine, but no Person will be admitted without one.
* Dinner will be on the Table at Three o’Clock precisely.
___________________________________________________________________________

On Friday next will be published,
Price ONE HALFPENNY,
AN AUTHENTIC List of all those who Dine at the Hotel, in Temple-Row, Birmingham, on Thursday the 14th inst. In Commemoration of the French Revolution.
Vivant Rex et Regina.