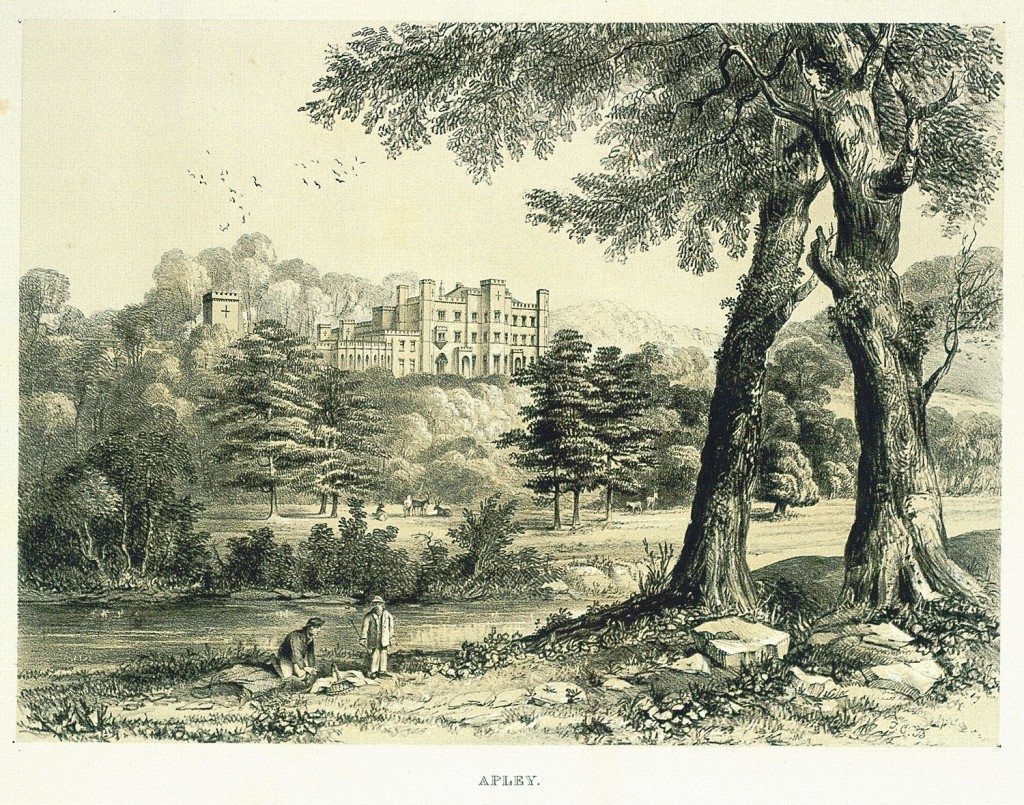 “Towers and battlements it sees,

How often has the artist, wandering in search of the picturesque beauties of Shropshire, stood on the banks of the Severn near Apley, to admire the scene which he has attempted to delineate in the accompanying picture. Perhaps nowhere has art united more happily with nature to adorn a scene eminently lovely, than in the natural amphitheatre formed by the grand terrace of Apley. On either side of the Seven, which divides the scene, rise well-clothed hills to a considerable height.

On the Apley side this hill diverges for about a mile, and along its summit is the great walk of the terrace, from whence the most magnificent views are obtained. Within the plain thus formed, are the happiest variety of trees and scenery. The Severn divides the plain. Where again the wooded slope approaches near the Severn, is situated the splendid building which forms the subject of the picture. On account of its elevated site, its base is seen above the highest trees in the plantation before it; and its battlements tower into the sky. Can a site be found more eligible for a mansion? Can a building be found better suited for its position? In the broad glare of day, when the light is reflected for every object, and the distance generally approaches the eye in every minutiae, the scenes about Apley suffer not, for the building will bear every light, and the distance every power of sight. But perhaps at evening the perfection of the whole is most felt; then the white battlements are gilded with the glowing tints of the departing sun – then the distances assume their best-toned grey, and the foregrounds form their boldest shadows. The traveller has admired this scene at such a time, and its accompaniments; the fisherman paddling his silent way in his coracle, with is nets and lines to his accustomed haunts – the many hundred rooks flitting to their nests, and filling the air with their hoarse music – the whistle of the tired peasant in broken catches, returning from his labor – the plash of fishes leaping at the flies that now fall to the water – and he has lingered to admire, till the curtain of darkness and the silence of night have covered the whole.

In the neighbourhood of Apley is Stockton, a pretty rural village with a picturesque church: three miles distant is Bridgnorth.

The property of Apley belongs to the family of WHITMORE, who have resided there about three centuries.