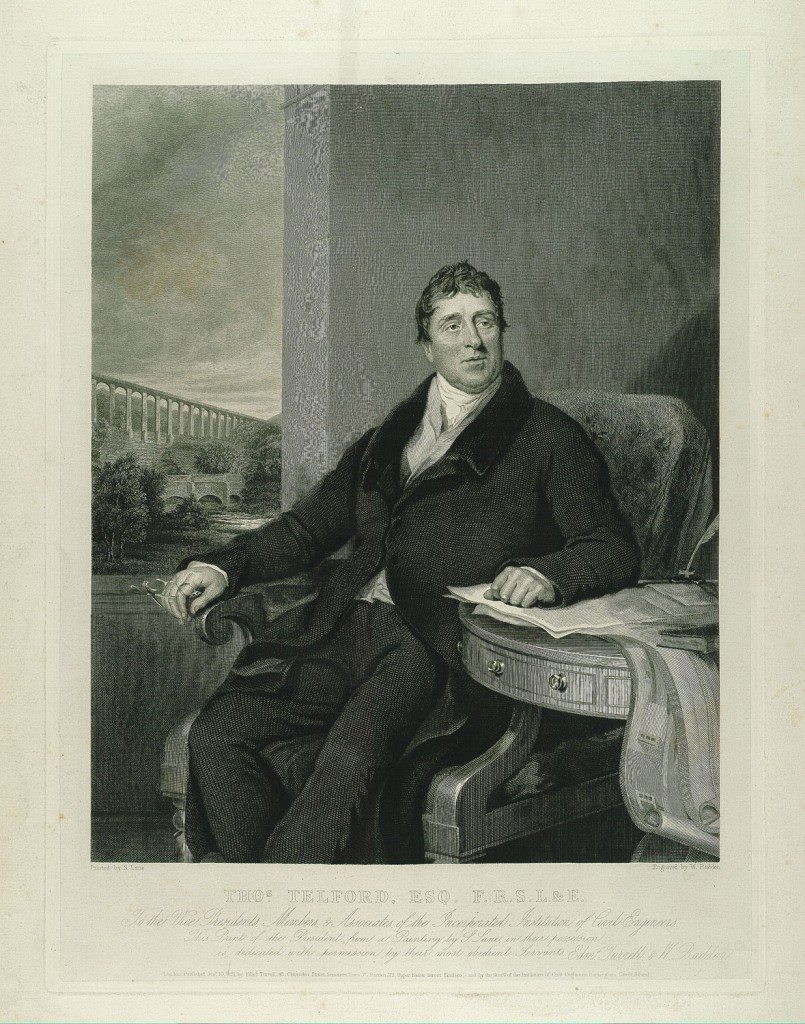 Like James Keir, William Murdock, William Small and James Watt, Thomas Telford was one of several Scots who contributed to the history of the West Midlands during the Industrial Revolution. He was born in 1757 at Glendinning, Dumfriesshire where his father, who died shortly after his birth, was a shepherd. Raised by his mother, he attended school and served an apprenticeship to a mason. He learned to carve and build with stone.

There were few opportunities for Telford in the south-west of Scotland, so in 1781 when he was 24, he walked to London, armed with a letter of introduction to William Poultney, a Scots merchant in the city. Poultney helped to launch Telford’s career. The young man secured work building Somerset House and undertook commissions at Portsmouth Royal Dockyards. Poultney was elected MP for Shrewsbury and in 1786 he brought Telford to the town to renovate the castle.

In 1787, Telford secured the post of Surveyor of Public Works for Shropshire. This established his reputation as a builder and civil engineer. He completed Shrewsbury’s new prison and designed bridges. Two examples from the West Midlands which used the masonry arch mode of construction were at Bridgnorth and Bewdley. During his career he built over 1,000 bridges. He was also invited to design local churches including St Mary Magdalene’s in Bridgnorth.

Telford used iron in bridge building, exploiting a tradition started by the local architect, Thomas Farnolls Pritchard at Ironbridge. He refined the use of the material to produce light, elegant structures. One straddled the Menai Straits, which connected the north Welsh mainland to the island of Anglesey and another was created over the estuary of the River Conway, also in North Wales. Both were opened in 1826. Telford also developed the principle of the suspension bridge by using wrought-iron chains. In conjunction with a Shropshire ironmaster, William Jessop, he created a watertight cast-iron aqueduct at Pont-Cysyllte on the Ellesmere Canal. In Shropshire, Telford was part of a network of late eighteenth and early nineteenth century innovators who exploited the structural properties of iron, including Charles Bage, William Hazledine and William Reynolds.

Telford also built canals, roads and harbours. He was engineer for the Ellesmere, Birmingham and Liverpool and Grand Trunk Canals. In Scotland he built the Caledonian Canal (1804-22) and the Gotha Canal (1808-32) in Sweden. Unlike his predecessor, James Brindley, Telford tried to overcome natural obstacles rather than circumnavigate them, so his constructions tend to travel in straight lines over the landscape. The contrast is best revealed in Smethwick, near Birmingham. Telford’s method of road construction was expensive, but it produced durable, long-lasting structures. His greatest achievement was the London-Holyhead built after 1815 on the site of the Roman Watling Street. Telford’s harbours included St Katherine’s Docks in London.

In 1820, the Institution of Civil Engineers was created and Telford became its first president. He was also elected to the Royal Society. When Telford began his career, civil engineering was a trade, but by the time of his death in 1834 it was a high status profession. The new town of Telford in Shropshire which includes the Ironbridge Gorge and various examples of the engineer’s achievements within its boundaries is named after the man.