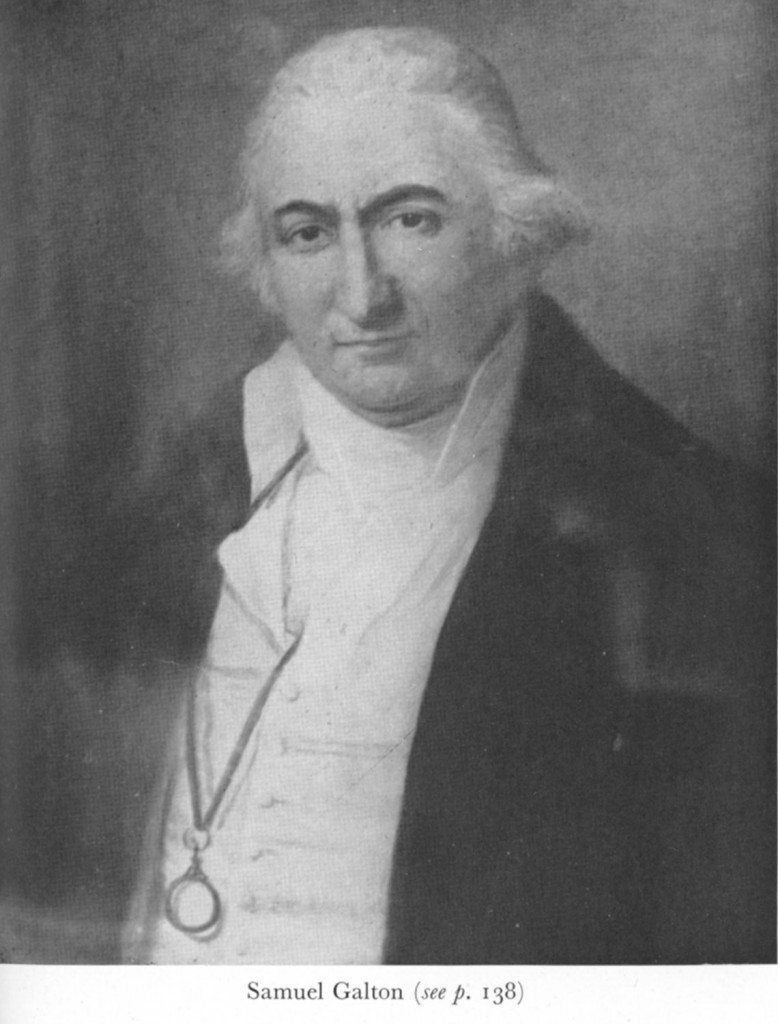 A Portrait of Samuel Galton jnr

Samuel Galton junior was born in Birmingham in 1753, the son of the gunmaker, Samuel Galton Senior. The family were Quakers, members of the Society of Friends, and the young Galton was educated at Warrington Academy after Priestley had left. He acquired an extensive commercial education. In 1773 Samuel Galton junior’s father made his son manager of the Steelhouse Lane gun works, becoming an equal partner with his father in 1774. As manufacturers the Galtons worked very closely with Boulton and Watt.

During the 1780s Samuel Galton junior began to attend Lunar Society meetings and several were held at his home in Great Barr. Galton was very interested in science and experimented in the areas of optics, light and colour. He was the most successful businessman of the group and was heavily involved in the commercial activities of the Lunar men including canal development.

With the threat of war looming in Europe, in 1790 the Society of Friends began to question the compatibility of gun-making and Quakerism, which was largely a pacifist Christian denomination. The following year, Galton provided personal assistance to Priestley and his family after the Priestley Riots. In 1792 Quaker disapproval of the Galtons increased when they were criticised for their involvement in slave trading. Relations with local Quakers worsened. When Samuel Galton junior retired in 1795, leaving his son in sole charge, he was forced to mount a strong defence of his involvement in gun manufacturing.

His retirement from this business in 1804 and involvement in banking, helped to restore his relations with local Quakers.

Samuel Galton junior died in 1832, leaving a vast fortune of £300,000. One of the contributors to Birmingham’s growth as a manufacturing town, he also provided a scientific input into the Lunar Society.

Schofield, Robert E., The Lunar Society, A Social History of Provincial Science and Industry in Eighteenth Century England (Oxford, Clarendon Press, 1963) Uglow, Jenny, The Lunar Men: The Friends who made the Future 1730-1810 (London, Faber and Faber, 2002)