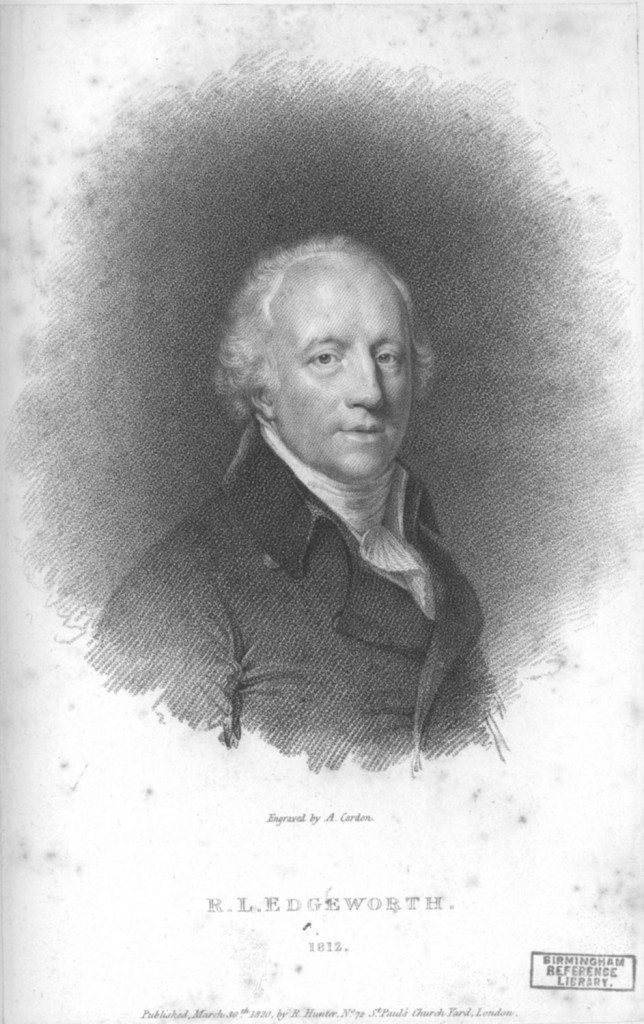 A Portrait of Richard Lovell Edgeworth

In 1744, Edgeworth was born in Bath into a landowning family which owned property in Ireland. At school he showed an interest in mechanics. In 1761, he went to Trinity College Dublin, followed by Oxford University. After his first marriage in 1763, he settled in Maidenhead and he invented various machines, including a land-measuring machine, turnip cutter and carriages. The latter led to a friendship with Erasmus Darwin, who was also interested in carriage design.

He made his first visit to Lichfield in 1770 where his friends Erasmus Darwin and Thomas Day had settled, and met Anna Seward. Edgeworth and Day spent time in France in 1771, where they met Rousseau. After the death of his first wife in 1773, he married Honora Sneyd in Lichfield and when she died in 1780, he married her sister, Elizabeth. Her death led to a fourth marriage in 1798. Altogether, Edgeworth had nineteen legitimate children.

Edgeworth returned to his estates in Ireland in 1782, but he frequently spent time in England. In Ireland he engaged in agricultural and road improvement, work to improve the condition of his tenants, educational reform and politics. Most of Edgeworth’s publications on education, transport, and mechanics were produced after his move to Ireland. In 1798 Edgeworth collaborated with his daughter, Maria on Practical Education, which served as a manual for raising children into the nineteenth century. They stressed the importance of learning through play and what later generations would call discovery methods. By the time of his death in 1817, Edgeworth had left a reputation as an inventor, economic innovator and educator.

Download PDF of article
Sources and Further Reading Clarke, Desmond, The Ingenious Mr Edgeworth (London, Oldbourne, 1965) Edgeworth, Richard Lovell and Maria, Edgeworth, R L and Maria, Memoirs of Richard Lovell Edgeworth Esq, begun by himself and concluded by his daughter, Maria Edgeworth (London, Richard Bentley, 1844) Schofield, Robert E., The Lunar Society, A Social History of Provincial Science and Industry in Eighteenth Century England (Oxford, Clarendon Press, 1963) Uglow, Jenny, The Lunar Men: The Friends who made the Future 1730-1810 (London, Faber and Faber, 2002)
Most read
Chronology of principal events that occurred during the Industrial Revolution in the West Midlands. Significant places in the historic counties of Derbyshire, Herefordshire, Shropshire, Staffordshire, Worcestershire and Warwickshire during the Industrial Revolution. Industrialists, engineers, artists, thinkers and writers who contributed to the Industrial Enlightenment, technology, art, culture, religion and politics. Explorations of industries and innovations; landscapes and localities; art and architecture; culture and diversity; and the place of the West Midlands in the contemporary world.
Revolutionary Players was developed between 2002 and 2004 and financed by the New Opportunities Fund. Revolutionary Players was created by Dr Malcolm Dick & Dr Kate Iles and managed by Birmingham Museums until 2015. Revolutionary Players is now published and funded by History West Midlands.