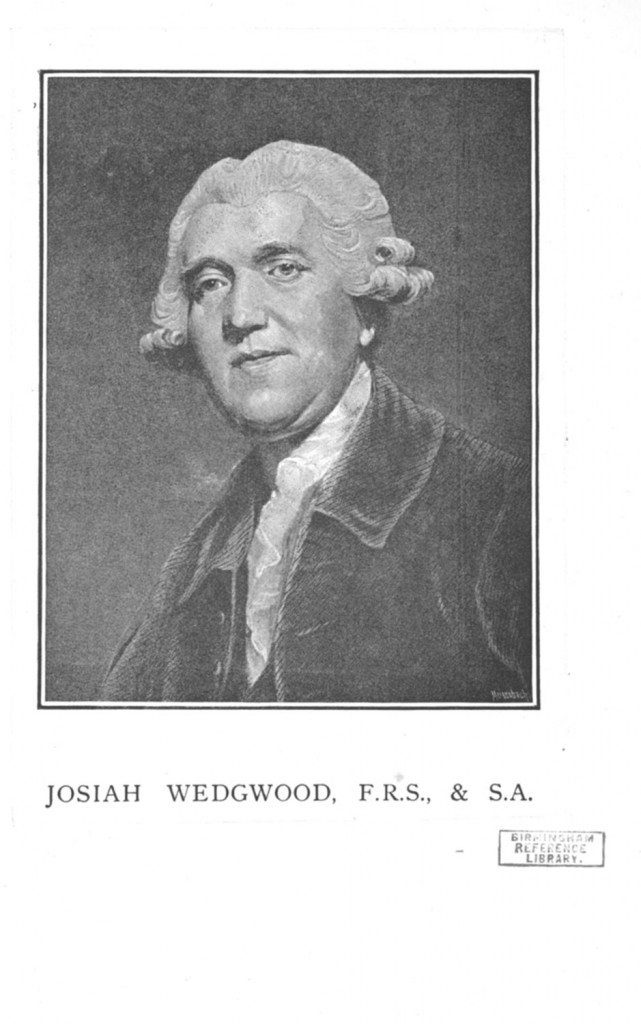 A Portrait of Josiah Wedgwood

Josiah Wedgwood was born in Burslem, Stoke-on-Trent in 1730 into a family of long established potters. In 1739 he started working in the family business. Childhood smallpox reduced his physical mobility and he spent his time researching and experimenting and developing his knowledge of the technical processes involved in the industry. In 1764 Wedgwood formed a partnership with Thomas Whieldon, one of Britain’s leading potters and developed his scientific expertise, particularly in developing glazes.

By 1759 Wedgwood established his own business at the Ivy House Works in Burslem. There he pioneered task specialisation – the division of labour – amongst his workforce. By 1762 he had developed a major export industry, helped by the Liverpool merchant, Thomas Bentley. Royalty patronised his products which added to their popular appeal. In 1765 Queen Charlotte, the wife of George III, patronised his cream-coloured earthenware which subsequently became known as Queen’s ware.

During the 1760s Wedgwood developed friendships with other Lunar Society figures and co-operated on technical developments and commercial enterprises. One practical result was the Trent and Mersey Canal which opened in 1777.

His manufacturing activities moved forward at the same time. In 1768 Wedgwood formed a partnership with Bentley, producing a range of high quality pottery – a marriage of art and manufacture. In 1771 he created a new factory at Etruria, which became the location for all of his production by 1773. The following year Wedgwood produced a famous service of 952 items for Catherine the Great of Russia. Etruria pioneered new forms of technology. In 1782 it became the first factory to install a steam engine. Wedgwood was also recognised for his inventiveness. In 1783 he became a fellow of the Royal Society after developing the pyrometer, which measured high temperatures in his pottery kilns.

Wedgwood also engaged in anti-slavery activities. He helped to form the Society for the Abolition of the Slave Trade in 1787 and produced a medallion for the campaign with a kneeling slave and the legend “Am I not a Man and a Brother?” around its edge.

Wedgwood died in 1795. He had created a pottery industry which was indebted to his scientific experiments, had pioneered many mass-production techniques, created a huge export-based industry and played a major role in transport developments.

Download PDF of article
Sources and Further Reading Dawson, Aileen, British Museum Masterpieces of Wedgwood, revised edition (London, British Museum, 1995) Reilly, Robin, Josiah Wedgwood (London, Macmillan, 1992) Schofield, Robert E., The Lunar Society, A Social History of Provincial Science and Industry in Eighteenth Century England (Oxford, Clarendon Press, 1963) Science Museum, London, Josiah Wedgwood: ‘the Arts and Sciences United’, (Barlaston, Staffordshire, Josiah Wedgwood and Sons, 1978). Illustrated exhibition catalogue with contextual information. Uglow, Jenny, The Lunar Men: The Friends who made the Future 1730-1810 (London, Faber and Faber, 2002)
Most read
Chronology of principal events that occurred during the Industrial Revolution in the West Midlands. Significant places in the historic counties of Derbyshire, Herefordshire, Shropshire, Staffordshire, Worcestershire and Warwickshire during the Industrial Revolution. Industrialists, engineers, artists, thinkers and writers who contributed to the Industrial Enlightenment, technology, art, culture, religion and politics. Explorations of industries and innovations; landscapes and localities; art and architecture; culture and diversity; and the place of the West Midlands in the contemporary world.
Revolutionary Players was developed between 2002 and 2004 and financed by the New Opportunities Fund. Revolutionary Players was created by Dr Malcolm Dick & Dr Kate Iles and managed by Birmingham Museums until 2015. Revolutionary Players is now published and funded by History West Midlands.