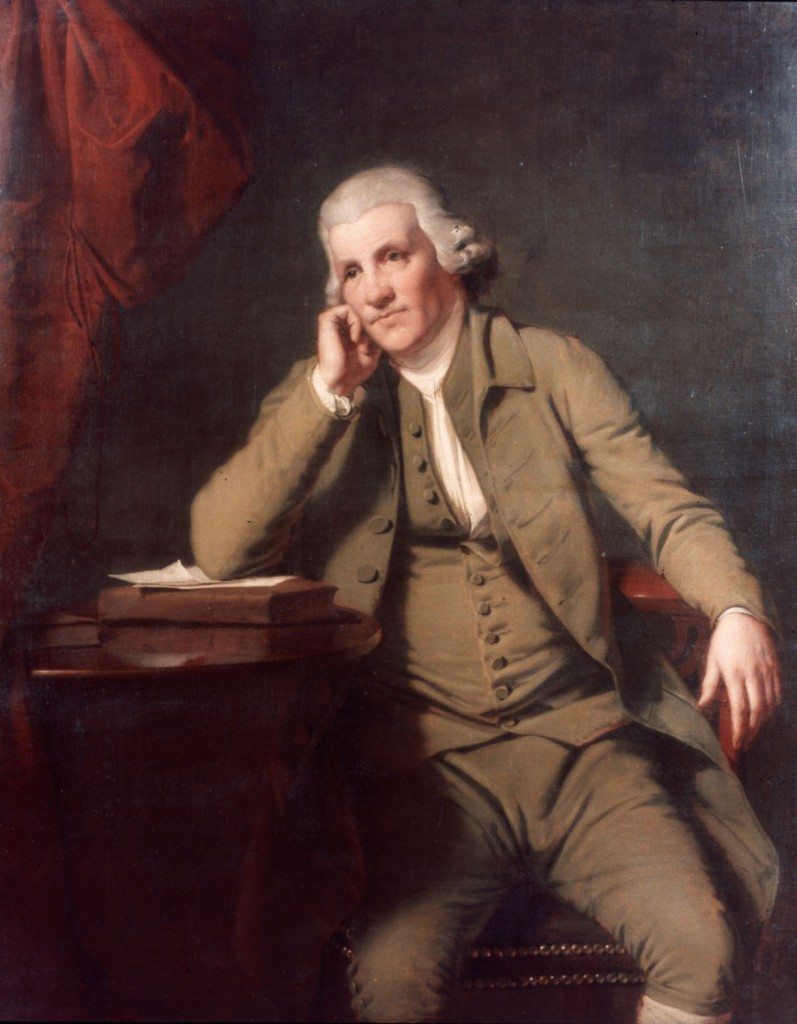 A Portrait of Jedediah Strutt

Jedediah Strutt (1726-1797) was one of leading pioneer industrialists of the 18th century. He was born at South Normanton, Derbyshire, in the family of small farmers who belonged to a Presbyterian community with strong Nonconformist religious views.
He made his fortune in the 1750s by improving and perfecting of the stocking frame, a machine invented in the 16th century. In late 1750s the invention was patented, and Strutt’s hosiery business began rapidly to grow. Raw silk was purchased in London and was prepared at Strutt’s Silk Mill in Derby. The thread was sold both to hosiers living locally and to merchants all around England.

Strutt also owned cotton mills at Belper and Milford. In order to be near his work Strutt built, from his own designs, Milford House near Belper, where he lived until 1795, when ill health compelled him to return to Derby.

For a short time he was a partner and investor of Richard Arkwright’s textile mills. Like many others of Nonconformist faith, Strut believed that wealth brought responsibility. This was probably his reason for dissolving his partnership with Richard Arkwright. He was disturbed by the rapid expansion of Arkwright’s industrial empire and his pursuit of profits regardless of the means by which they were achieved.

Strutt himself was considered to be a good employer. Several observers commented favourably about the quality of the houses that he built for his workers in Belper and Milford. One of visitors to Belper village wrote that it was a shame that there were not more factories owned by “men of enlarged benevolence and active philanthropy.”
A few months before his death, Jedediah Strutt wrote his own epitaph: ‘Here rests in peace Jedediah Strutt who, without fortune, family or friends raised to himself a fortune, family, and a name in the world. Without much genius enjoyed the more substantial blessing of a sound understanding. He led a life of honesty and virtue and not knowing what would befall him after death, he died resigned in full confidence that if there be a future state of retribution it would be to reward the virtuous and the good’.

Wright’s portrait of Jedediah Strutt corresponds with this epitaph. The artist captured not only his likeness but also the feeling of an honest life and virtue, and the quiet and religious character of the sitter. (Compare: ‘Portrait of James Donnithorne’ by T.Gainsborough)

Download PDF of article
Sources and Further Reading The Derwent Valley Mills Partnership, The Derwent Valley Mills and their Communities(The Derwent Valley Mills Partnership, County Hall, Derbyshire, 2001) Fitton R S and Wadsworth, A P, The Strutts and the Arkwrights 1758-1830 (1958) Strutt, F, Jedediah Strutt: Memorials of old Derbyshire, edited by Cox, J C (1907). Tann, Jennifer, The Develoment of the Factory (1970)
Most read
Chronology of principal events that occurred during the Industrial Revolution in the West Midlands. Significant places in the historic counties of Derbyshire, Herefordshire, Shropshire, Staffordshire, Worcestershire and Warwickshire during the Industrial Revolution. Industrialists, engineers, artists, thinkers and writers who contributed to the Industrial Enlightenment, technology, art, culture, religion and politics. Explorations of industries and innovations; landscapes and localities; art and architecture; culture and diversity; and the place of the West Midlands in the contemporary world.
Revolutionary Players was developed between 2002 and 2004 and financed by the New Opportunities Fund. Revolutionary Players was created by Dr Malcolm Dick & Dr Kate Iles and managed by Birmingham Museums until 2015. Revolutionary Players is now published and funded by History West Midlands.