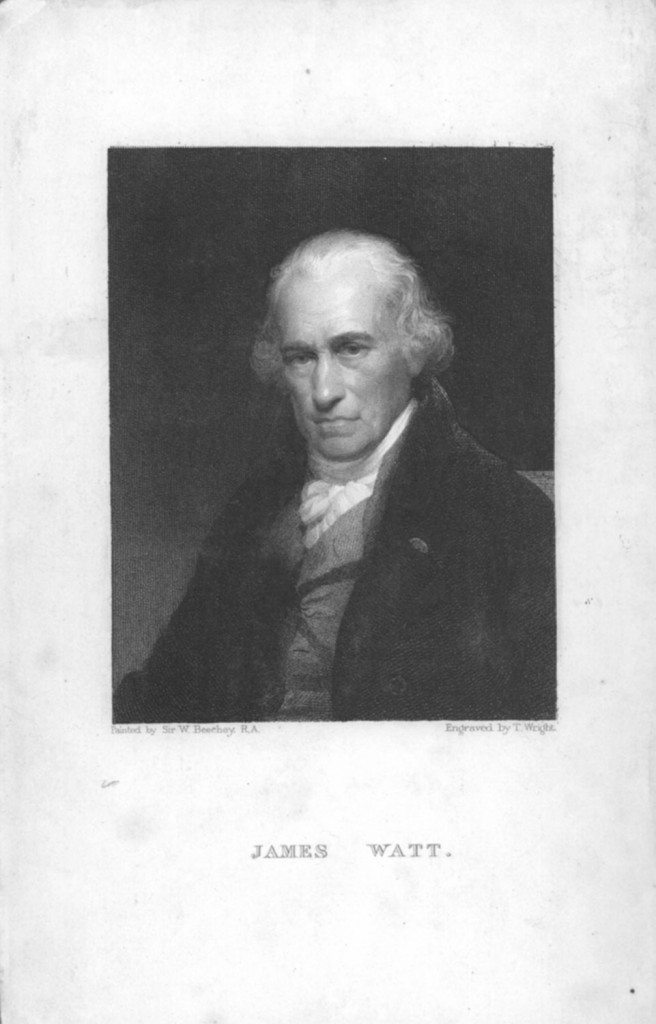 A Portrait of James Watt

James Watt was born in Greenock, Scotland in 1736. His father was an instrument maker, ship-owner and merchant. As a boy Watt suffered from ill health, but he showed considerable flair for geometry and as a model maker. In 1753 he moved to Glasgow and subsequently to London in 1755 to become a mathematical instrument maker.

On returning to Glasgow in 1757, he became Mathematical Instrument Maker to Glasgow University. He knew several academics, including Joseph Black from whom he learned the principles governing heat and steam. In 1764 he repaired a model of a Newcomen steam engine at the University and this developed his interest in steam technology. Watt introduced a separate condenser into the Newcomen engine in 1765 which improved its efficiency as a pumping machine. He was aware of its commercial possibilities and joined with John Roebuck, a leading Scottish iron master, to manufacture it. Watt took out a patent in 1769 for “A New Invented Method of Lessening the Consumption of Steam and Fuel in Fire Engines.” Roebuck’s business was unable to develop the engine and the partnership was dissolved in 1772. For several years Watt worked as a surveyor for canals, rivers and harbours.

Watt left Scotland in 1774 for Birmingham. William Small had already introduced him to Boulton and he entered into a partnership with Boulton in 1775. Boulton’s Soho Works had the expertise to build and market the improved steam pump. Watt participated in Lunar Society activities. During the 1780s he developed several inventions which improved the steam engine, including a rotary motion (1781), a double-acting engine, in which the piston pulls and pushes (1782) and the centrifugal governor for automatic control of the engine’s speed (1786). The rotary motion enabled the engine to power factory machinery. In 1800 he retired from the firm of Boulton and Watt, but he continued to pursue inventions.

Watt died at his home, Heathfield House in Handsworth, in 1819 at the age of 84. His contribution to the emergence of Britain’s engineering industry is massive, but without Boulton’s business expertise and Darwin’s psychological support – Watt suffered from depression – his significance might not have been so clear.