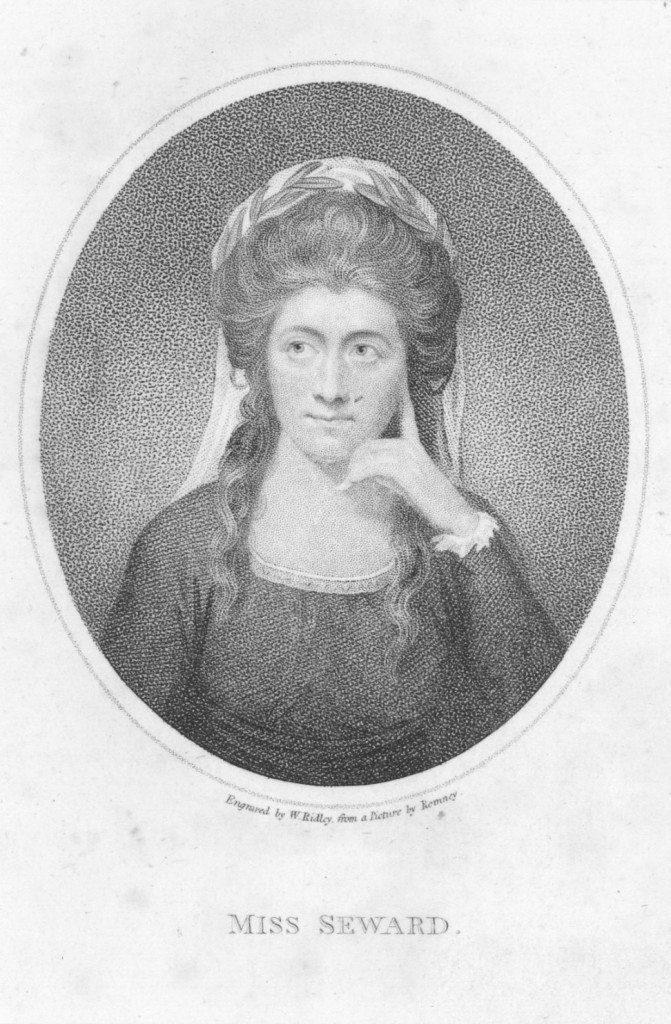 A Portrait of Anna Seward

Born in Derbyshire in 1742, Anna Seward was the daughter of Thomas Seward and Elizabeth Hunter. Her father undertook her education and Anna developed her literary tastes at an early age, reading Milton at two and writing religious verse at ten. After her father became Canon of Lichfield Cathedral in 1754, Anna and her family moved to Lichfield and became neighbours of Dr Erasmus Darwin. He became aware of her literary talents and encouraged her to write poetry.

In 1764 Anna’s sister, Sarah died and subsequently, Canon and Mrs Seward adopted Honora Sneyd, who later married Richard Lovell Edgeworth. After her mother died in 1780, Anna remained at home, caring for her father and continuing to write poetry. She published Elegy on Captain Cook, which established her literary reputation. In 1781 she published Monody on Major Andre, which dealt with the hanging of one of Honora Sneyd’s suitors in the American War of Independence. The poem enjoyed success both in Britain and America. Between 1782 and 1787 Anna Seward published Louisa, a poetical novel and other poems and also wrote a series of letters under the name of “Benvolio” to the Gentleman’s Magazine. By now, Anna increasingly moved in literary and intellectual circles and was frequently meeting with Darwin, Thomas Day, Edgeworth and Dr Johnson.

In 1790 Canon Seward died. Anna remained living in the Bishops Palace at Lichfield. In 1802 Anna began corresponding with Walter Scott, whose work she admired. Her Memoir of Dr Darwin, was published in 1804, a not entirely flattering account of the great man, as Anna accuses him of plagiarising her own work for The Botanic Garden. Anna met Scott when he visited Lichfield. After her death he edited her work.

Anna Seward died in 1809 and was buried in Lichfield Cathedral. Darwin credited her with inventing a poetic form, the epic elegy and she is clearly a major contributor to romantic poetry. Her poem Colebrookdale (1785) is an early criticism of the ways in which industrialisation violates nature.

Download PDF of article
Sources and Further Reading Ashmun, Margaret, The Singing Swan: an account of Anna Seward and her acquaintance with Dr Johnson, Boswell and others of their time (New Haven, Yale University Press, 1931) Scott, Walter (ed.), The Poetical Works of Anna Seward with extracts from her letter and literary correspondence (Edinburgh, James Ballantyne, 1810) Roberts, Marion, “Anna Seward - ‘The Queen Muse of Britain’”, The Female Spectator, Chawton House Library, Vol. 9, No. 2, Winter 2005, pp 1-4 Schofield, Robert E., The Lunar Society, A Social History of Provincial Science and Industry in Eighteenth Century England (Oxford, Clarendon Press, 1963)
Most read
Chronology of principal events that occurred during the Industrial Revolution in the West Midlands. Significant places in the historic counties of Derbyshire, Herefordshire, Shropshire, Staffordshire, Worcestershire and Warwickshire during the Industrial Revolution. Industrialists, engineers, artists, thinkers and writers who contributed to the Industrial Enlightenment, technology, art, culture, religion and politics. Explorations of industries and innovations; landscapes and localities; art and architecture; culture and diversity; and the place of the West Midlands in the contemporary world.
Revolutionary Players was developed between 2002 and 2004 and financed by the New Opportunities Fund. Revolutionary Players was created by Dr Malcolm Dick & Dr Kate Iles and managed by Birmingham Museums until 2015. Revolutionary Players is now published and funded by History West Midlands.