Home·Browse·A History of the Practice of Trepanning the Skull: 2. A Narrative of the Case of a Fractured Skull 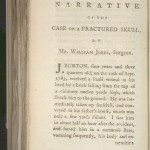 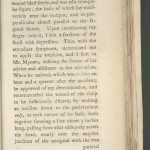 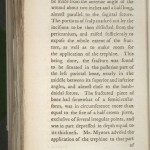 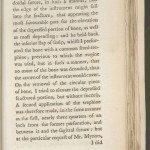 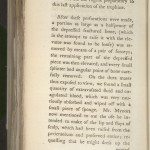 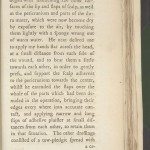 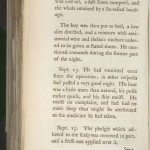 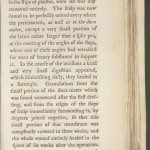 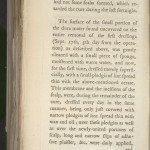 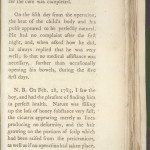 A History of the Practice of Trepanning the Skull: 2. A Narrative of the Case of a Fractured Skull

A NARRATIVE OF THE CASE OF A FRACTURED SKULL BY MR. WILLIAM JONES, SURGEON.

J. BURTON, four years and three quarters old, on the 12th. Sept. 1783, received a small wound in his head by a brick falling from the top of a chimney twelve yards high, which struck him to the ground. He was immediately taken up senseless, and conveyed to his father’s house, which was only a few yards distant. I saw him in about half an hour after the accident and found him in a comatose state, vomiting frequently, his body and extremities

cold, and his pulse small. The wound bled freely, and was of a triangular figure; the basis of which lay transversely near the occipur, and its perpendicular almost parallel to the sagittal suture. Upon introducing my finger into it, I felt a fracture of the skull with depression. This, with the attendant symptoms, determined me to apply the trephine, and I sent to Mr. Mynors, desiring the favour of his advice and assistance in the operation. When he arrived, which was within an hour and a quarter after the accident, he approved of my determination, and recommended the wound of the scalp to be sufficiently dilated by making an incision down to the pericranium only, at each corner of its base; both together forming a line about 5 inches long, passing somewhat obliquely across the head, nearly over the angular junction of the occipital with the two

parietal bones; and a third incision to be made from the anterior angle of the wound about two inches and a half long, almost parallel to the sagittal suture. The portions of scalp marked out by the incisions to be then dissected from the pericranium, and raised sufficiently to expose the whole extent of the fracture, as well as to make room for the application of the trephine. This being done, the fracture was found to be situated in the posterior part of the left parietal bone, nearly in the middle between its superior and inferior angles, and almost close to the lambdoidal suture. The fractured piece of bone had somewhat of a semicircular form, was in circumference more than equal to the size of half a crown piece, exclusive of several irregular points, and was in part depressed in depth equal to its thickness. Mr. Mynors advised the application of the trephine to that part

of the sound bone nearest to the lambdoidal suture, in such a manner, that the edge of the instrument might fall into the fracture, that appearing the most favourable part for the elevation of the depressed portion of bone, as well as most depending; and he held back the inferior flap of scalp, whilst I perforated the bone with a common sized trephine; previous to which the rugine was used, but in such a manner, that no more of the bone was denuded, than the crown of the instrument would cover. On the removal of the circular piece of bone, I tried to elevate the depressed fractured portion, but without success. A second application of the trephine was therefore made, in the same manner as the first, nearly three quarters of an inch from the former perforation, and between it and the sagittal suture: but at the particular request of Mr. Mynors,

I did not use the rugine preparatory to this last application of the trephine.

After these perforations were made, a portion as large as a halfpenny of the depressed fractured bone, (which in the attempt to raise it with the elevator was found to be loose) was removed by means of a pair of forceps; the remaining part of the depressed piece was then elevated, and a very small splinter and angular point of bone carefully removed. On the dura mater thus exposed to view, we found a small quantity of extravasated fluid and coagulated blood, which was very cautiously absorbed and wiped off with a small piece of sponge. Mr. Mynors now mentioned to me the use he intended to make of the lip and flaps of scalp, which had been raised from the pericranium and preserved entire; requesting that he might dress up the

wound the first time. He accordingly began with moistening the inner surface of the lip and flaps of scalp, as well as the pericranium and parts of the dura mater, which were now become dry by exposure to the air, by touching them lightly with a sponge wrung out of warm water. He next desired me to apply my hands flat across the head, at a small distance from each side of the wound, and to bear them a little towards each other, in order to gently press, and support the scalp adherent to the pericranium towards the center, whilst he extended the flaps over the whole of the parts which had been denuded in the operation, bringing their edges every where into accurate contact, and applying narrow and long slips of adhesive plaister at small distances from each other, to retain them in that situation. The other dressings consisted of a tow-pledgit spread with

a cerate composed of equal parts of wax and oil, a soft linen compress, and the whole retained by a six-tailed bandage.

The boy was then put to bed, a low diet directed, and a mixture with antimonial wine and thebaic tincture ordered to be given at stated times. He continued comatose during the former part of the night.

Sept. 13. He had vomitted once since the operation; in other respects had passed a very good night. His heat was a little more than natural, his pulse rather quick, and his skin moist. He made no complaint, and had had no more sleep than might be attributed to the medicine he had taken.

Sept. 15. The pledgit which adhered to the scalp was removed in part, and a fresh one applied over it.

Sept. 17. The former pledgits, as also the slips of plaister, were this day removed entirely. The scalp was now found to be perfectly united every where the pericranium, as well as the the dura mater, except a very small portion of the latter rather larger than a split pea, at the meeting of the angles of the flaps, where one of these angles had retracted for want of boney substance to support it. In the course of the incisions a kind and very small digestion appeared, which diminishing daily, they healed in a fortnight. Granulations from the small portion of the dura mater which was found uncovered after the first dressing, and from the edges of the flaps of scalp immediately surrounding it, by degrees joined together, so that this small portion of that membrane was compleatly covered in three weeks, and the whole wound entirely healed in the space of six weeks after the operation.

It would have been cicatrized sooner, had not some scabs formed, which retarded the cure during the last fortnight.

The surface of the small portion of the dura mater found uncovered on the entire removal of the first dressings (Sept.17th, 5th day from the operation) as described above, was gently cleaned with a small piece of sponge, moistened with warm water, and now, for the first time, dressed merely superficially, with a small pledgit of lint spread thin with the above-mentioned cerate. This membrane and the incisions of the scalp, were, during the remainder of the cure, dressed every day in the same manner, being only just covered with narrow pledgits of lint spread thin with wax and oil; over these pledgits as well as over the newly-united portions of scalp, long and narrow slips of adhesive plaister, &c. were daily applied,

and were continued for some time after the cure was completed.

On the fifth day from the operation, the heat of the child’s body and his pulse appeared to be perfectly natural. He had no complaint after the first night, and, when he asked how he did, he always replied that he was very well; so that no medical assistance was necessary, further than occasionally opening his bowels, during the five first days.

N.B. On Feb. 28, 1785, I saw the boy, and had the pleasure of finding him in perfect health. Nature was filling up the loss of boney substance very fast, the cicatrix appearing merely as lines producing no deformity, and the hair growing of the portions of scalp which had been raised from the pericranium, as well as if no operation had taken place.